When a big earthquake hits, your first instinct can mean life or death

What should you do when an earthquake hits? Cover in place? Run outside?

It’s a decision one must instantly make when the shaking begins. Californian natives might instinctively drop under a table, cover their head and hold tight. Out-of-staters might feel an urge to flee out the door.

During the global ShakeOut drill held at 10:19 a.m. PDT on Thursday, one common refrain was to drop, cover and hold on.

There’s a reason for that. Many deaths in California’s earthquakes have come from moving objects inside a room — like a loose television or a falling microwave.

The last person to die in a California earthquake, during the 2014 Napa temblor, was a woman who was struck in the head by a television that wasn’t strapped down. 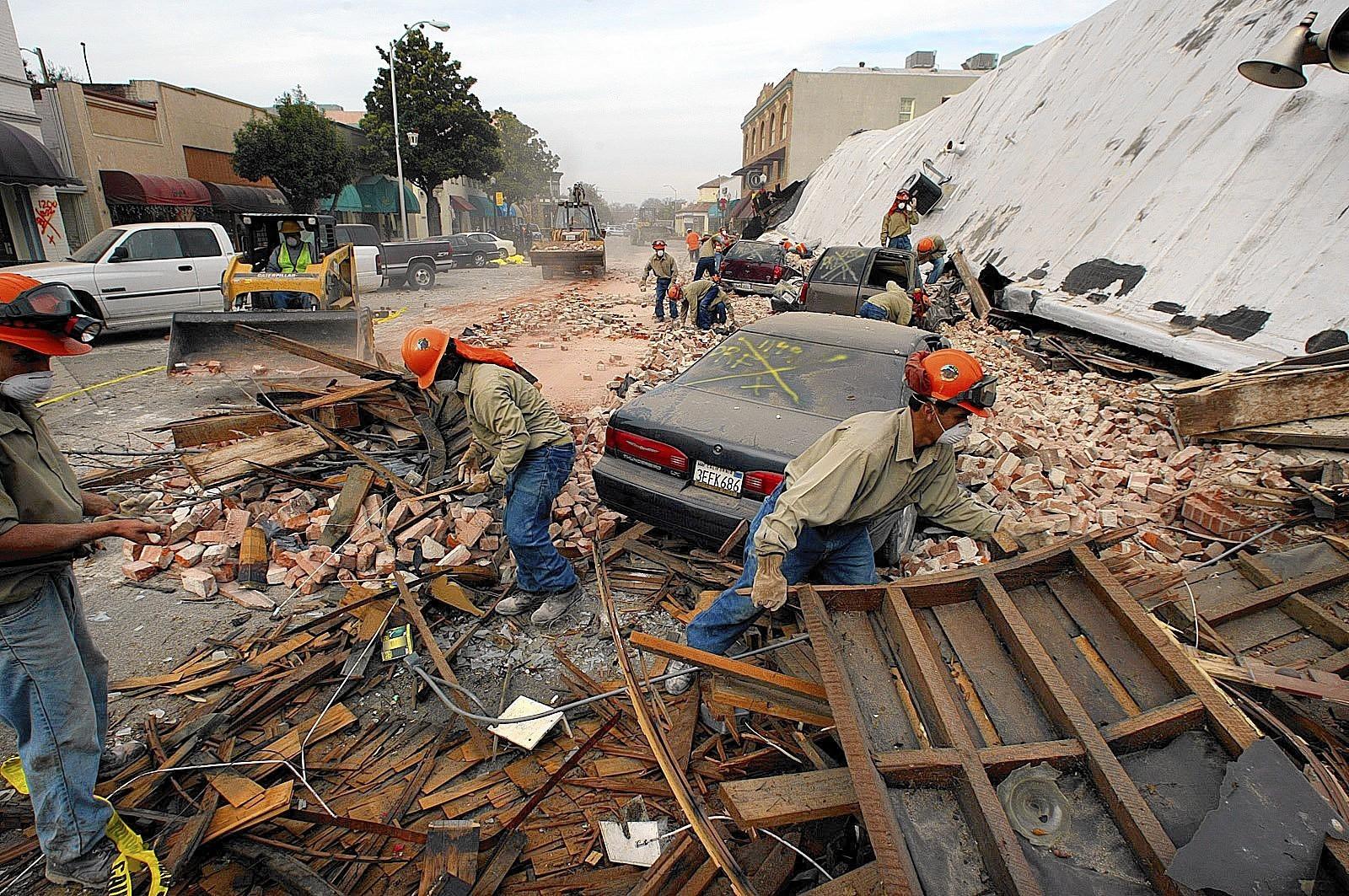 Another big rationale: The most vulnerable part of a building can be the facade. That means that while a building may continue standing after an earthquake, the first thing to collapse likely will be part of its outer wall — posing a deadly hazard for anyone trying to escape.

Before the Napa earthquake, the last two people who died in a California quake ran out of an unretrofitted brick building when a temblor struck Paso Robles in 2003. A wall came tumbling down on them as they exited. If they had stayed inside, experts said, they would have survived.

Something similar happened during the Sept. 19 Mexico earthquake. In the town of Jojutla in the state of Morelos, about a two-hour drive south of Mexico City, three people died when they fled the historic town hall. As they ran out, parts of the unretrofitted brick building fell, crushing them.

“As they escaped through the building, that bell tower fell and killed the people right on the spot there. So sometimes, it’s really dangerous to just run out,” said California seismic safety commissioner Kit Miyamoto, who recently visited Mexico.

In California, generally speaking, you’re better off staying in the building, said Miyamoto, a structural engineer.

“Chances are, you’ll get hit by something on the street,” Miyamoto said.

Brick buildings, in particular, tend to fall outward, Miyamoto said, making it generally a bad idea to run out of a brick structure. Miyamoto said he’d also stay inside a steel frame building, as the probability of a steel building collapsing is believed to be relatively small.

But for Miyamoto, there are exceptions. One of them is being in an older, brittle concrete building.

Videos taken during the recent Mexico earthquake showed instances where collapses of brittle concrete buildings did not happen immediately. That threat gave some occupants precious seconds to run outside before a building collapsed.

Brittle concrete buildings were exposed for their vulnerabilities in the 1971 Sylmar earthquake, but most local governments around the world have done nothing to require owners to go back and strengthen those buildings.

The city of Los Angeles in 2015 passed a law requiring such buildings to be retrofitted, but gave owners a 25-year deadline to do it once they are given an order to seismically evaluate the building. The city plans to send out the orders next year, according to the mayor’s office.

The threat posed by brittle concrete buildings is well established. Just last month, a seven-story building on Avenida Alvaro Obregon in Mexico City suffered a catastrophic collapse, with its columns exploding under the weight of the fall. Forty-nine people died in that building — the highest death toll of any single site in Mexico.

But others in that building escaped by running for cover in a steel stairwell that was part of a separate structural system. Those that made it to the stairwell survived, said Miyamoto, who consulted with local engineers on the recovery effort.

Even in the United States, if Miyamoto knows he is in a brittle concrete building, “I [would] probably run out if I was on the ground floor. I know how these buildings are extremely dangerous firsthand,” he said.

But he added that being struck by falling objects is still a high risk. “So I would be very careful,” he said.

So what are you supposed to do in California if you don’t have that technical knowledge of knowing what kind of building you’re in?

Ideally, the owner would have seismically retrofitted the building so occupants can safely drop, cover and hold on without fearing a collapse.

But if you have to make a decision, and you don’t know what type of building you’re in, Miyamoto advises: “Stay in.” He stressed that many people can die from falling walls and objects.

Other experts agree that staying inside is a safer bet in California.

“I would not like to be in a bad building where I would have to make that choice,” seismologist Lucy Jones said. “I really can’t say, ‘Run outside,’ if they’re in a bad building. I have seen too many situations where people run out of a bad building and the building collapses on them as they ran outside.”

There is a chance that a person might emerge unscathed in an earthquake after running. But there are data suggesting that, statistically speaking, running opens you up to a higher risk of injury.

A New Zealand earthquake study found most people who were injured had been trying to move around during the shaking, U.S. Geological Survey seismologist Elizabeth Cochran said.

By trying to run, you may end up in a more vulnerable location.

During a recent visit to a Mexico school, Cochran said she was told how a group of schoolchildren started evacuating as soon as they felt the first shaking. But the shaking became so strong in this location that the students could no longer walk, and had to shelter in place in the hallway just outside the classroom door, Cochran said.

In that particular school, officials had done an excellent job of securing furniture and other objects, so the students weren’t in any more danger at this particular location. “But had that not been the case, then ducking and covering under a desk would have been preferable,” she said.

Having different advice for how to react in different buildings risks confusing people, Cochran said.

“I’m not a structural engineer. I wouldn’t necessarily know walking into a building that it’s one that’s at risk. So we need to be focused, hopefully, on retrofitting that building. Giving people different messages in terms of what their response should be during an earthquake — it’s too easy to get confused,” Cochran said.

L.A., Santa Monica and West Hollywood have passed laws requiring owners of brittle concrete buildings to retrofit them. But most other local governments in California have not done so..