Santa Monica is poised to require safety improvements to as many as 2,000 earthquake-vulnerable buildings in what would be the nation’s most extensive seismic retrofitting effort.

Santa Monica’s safety rules would go beyond what Los Angeles has done by requiring not only wood apartments and concrete buildings to be retrofitted, but also steel-frame structures.

Steel buildings were once considered by seismic experts to be among the safest. But after the 1994 Northridge earthquake, engineers were stunned to find that so-called “steel moment frame” buildings fractured.

No steel building suffered a catastrophic failure that took lives in that earthquake, but some were so badly damaged they had to be demolished. One — the Automobile Club of Southern California building in Santa Clarita, open for just 21 months — came very close to collapse, Hamburger said.

A year later, one story of a Japanese steel building collapsed during the 1995 Kobe earthquake.

Now, Santa Monica has decided to tackle what has been the third rail of seismic safety. It has been controversial because retrofit costs are significant, especially for tall skyscrapers, and because steel buildings are less likely to collapse than other types of vulnerable buildings. 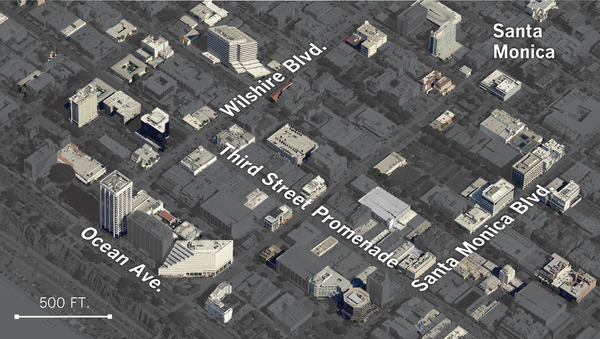 The mayor acknowledged that the price tag of retrofits would be a burden in the short term. City officials estimate a cost of $5,000 to $10,000 per unit to retrofit a typical wood apartment building and $50 to $100 per square foot for concrete and steel buildings.

That is a fraction of the price tag if an entire building were to collapse.

“But taking the long view — that process is much preferable to the loss of life and the destruction of buildings,” Winterer said.

The city’s move comes more than three years after The Times reported how Santa Monica quietly stopped enforcing its earthquake safety regulations. Santa Monica had actually passed laws in the 1990s requiring retrofits of these buildings. But the mandatory retrofit effort quietly faded in the early 2000s, amid the departure of key staff. By 2013, the city could not find its old list of possibly vulnerable buildings.

Former city officials were stunned when told of the missing list, and the city’s elected leaders vowed to take up the issue.

“‘There is no greater responsibility of government than public safety,’” Councilman Kevin McKeown said at a recent council meeting, quoting from a staff report. “But here, we have a case to preemptively prevent a lot of injury and damage.”

Santa Monica is at a particular risk of earthquakes. The Santa Monica fault runs through the northern half of the city. Santa Monica was also hard-hit by the Northridge quake, which badly damaged several landmark buildings, including the St. Monica Catholic Church, and caused the loss of 1,500 apartments, or about 5% of the city’s total stock.

Santa Monica has released its list of possibly vulnerable buildings, the result of a three-year-long process to identify them. The City Council is scheduled to vote on a law Tuesday that would require owners to conduct a seismic evaluation and, if needed, order the buildings to be retrofitted.

Of the roughly 2,000 buildings, about 1,700 of them are suspected to be wooden apartment buildings with carports on the ground story and held up by flimsy columns that might snap in an earthquake. Known as soft-story buildings, one such complex collapsed in the 1994 Northridge earthquake, killing 16 people on the ground floor in the predawn darkness.

About 150 are suspected vulnerable brick buildings, also known as unreinforced masonry, in which bricks can come spilling out of walls, striking occupants and passersby and triggering the collapse of the roof. This type of building construction has generally been outlawed in California since the 1933 Long Beach earthquake. Some possibly vulnerable brick buildings are located along the popular Third Street Promenade of shops.

The tallest buildings on the list are steel and concrete buildings. About 80 were identified as steel buildings, with the tallest a 13-story condominium and two 12-story office buildings.

About 60 suspected brittle concrete buildings were listed, holding residences, hotel rooms and office space. The tallest is a 21-story building on the western edge of Wilshire Boulevard, which overlooks the Pacific Ocean.

The law would not require retrofits of single-family homes.

With the release of its list, Santa Monica has become the first city in California to publicly post a list of addresses of possibly vulnerable concrete and steel buildings that should be evaluated for seismic risk.

Some experts praised Santa Monica for taking the step of identifying possibly vulnerable steel buildings and making it public.

“People in steel buildings deserve to know if their buildings have problems,” said Thomas Heaton, Caltech’s director of the Earthquake Engineering Research Laboratory.

Among the reasons for the flaws in steel buildings were problems in welding technique and inspections, the filler metal used in the welds, and the basic configuration of the connection between vertical columns to horizontal beams, Hamburger said.

There are a couple of ways to retrofit steel buildings. One is to remove the filler metal used to weld together the steel frame, and replace it with a more modern, tougher metal, said structural engineer Thomas Sabol, a principal at Englekirk. Adding more steel to reinforce the frame can also help.

Another approach has been to reduce the stress on the existing steel frame by adding the equivalent of shock absorbers, which are full of a viscous fluid, Sabol said.

“If a building collapses, you’re stuck for years. The cost to society is extremely high,” said structural engineer Ashwani Dhalwala, who has chaired the steel committee for the Structural Engineers Assn. of Southern California.

Santa Monica’s proposed law gives owners of steel buildings the most time to retrofit once an order is given to evaluate the structure — 20 years. Brittle concrete buildings will have a deadline of 10 years; wooden apartment buildings, six years; tilt-ups, three years; and brick buildings, two years.

There have been few signs of organized opposition to the proposed law. The Building Owners and Managers Assn. signaled support at a council meeting in December. The city Rent Control Board has yet to consider how retrofit costs will be distributed between owners and tenants.